My father passed away unexpectedly last week, and I haven’t known what to write. I’ve wanted to post something honoring and affirming of him, but creativity is still escaping me. I think I will share a portion of a tribute letter that I read to him at his recent 70th birthday party. Last December our family gathered to honor his birthday and affirm him via tribute statements (the sentiment that was expressed from my mom, my brothers and sister, and all of the in-laws and grandchildren was PHENOMENAL). I presented my tribute in the form of a recommendation letter.

To whom it may concern…to young men everywhere in this generation:

I am writing to wholeheartedly and without reservation recommend my father, David Jackson, to you as a model of noble manhood. For the forty-five years of my life he has never wavered in his commitments to love, loyalty, devotion, wisdom, and strength. These virtues were hard-won. His path was not an easy one. The cultivation of manhood never is, but his path was particularly severe—he was bounced between his father and stepfather as a child, adrift after losing his mother as a teen, buffeted by the social upheavals of his generation, and then drafted into Vietnam while practically still a boy.

He didn’t glide through those times unscarred; no one becomes a man without taking on scars. And nor was he unflawed. His flaws and demons run as deep as anyone’s…but the mark of noble manhood is the willingness to never give up the fight.

As a boy, I watched him model strength, determination, and tenacity, as he changed the course of his personal and family histories. I watched him bear the weight of a community, as he reinvented himself from rebel to guardian angel. And yet the rebel never fully went away.

That’s another mark of authentic manhood—remaining ever true to who you really are. Despite the shifting roles from young husband to father to older man and grandfather, he has remained steadfast to his core, guiding values. I really haven’t ever seen him slip.

He modeled faith and spirituality, and a willingness to repent and heal our family. That takes the most courage of all—owning life’s regrets and then pioneering new realities.

Self-help books abound in our day and age, but noble manhood isn’t something that is carbon copied or mass-produced. If you follow my urging and set my dad as your pattern, you won’t be following a well-worn path. There haven’t been many men like him. In fact, he once told me that there were only ever four truly “cool” men: Elvis Presley, James, Dean, Clint Eastwood, and himself. 🙂

But if you want to follow a trail that winds through great highs and deep lows, through extreme joys and unthinkable sorrows, and then back into sunlight again, his is the path to follow.

As a husband, father, grandfather, woodsman, surfer, poet, worshipper, law enforcement officer, and friend, he has excelled, and I am convinced that he will make a worthy addition to your Noble Manhood Hall of Fame. 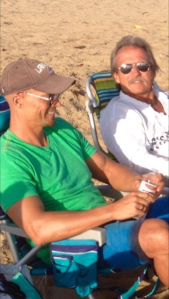 33 thoughts on “Farewell tribute to my father”