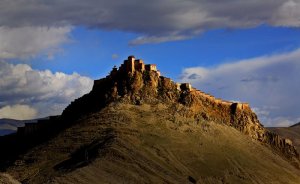 At Grace Church we support a ministry called AIM (Agape International Missions), an organization devoted to abolishing sex trafficking in our generation. A number of years ago AIM shut down a horrifying brothel in Svay Pak, Cambodia where young, elementary age girls were employed as sex slaves. In the center of the brothel—the place where virgin girls were kept—there was a brightly painted room called The Pink Room. Through a series of powerful events AIM was able to shut down the brothel and tear apart The Pink Room, and today the former Pink Room is now a part of their ministerial headquarters!

Before King David could set up his headquarters in the city of Jerusalem he too had to drive out some enemy occupants. The Jebusites, entrenched in their Jerusalem stronghold, had defied Israel for many decades until David came along and dispossessed them (2 Samuel 5:7).

Often, strategic centers for mercy, truth, and justice have to be taken before they can be occupied.

I wonder where your headquarters needs to be established?

You might not need to convert a brothel or evict an army from a mountaintop, but you still need a place to set up shop. You need a command center, from which you will conduct your ministry to the world. Perhaps that place is a former stronghold in your life. Perhaps your ministry will flow from an area of former weakness.

Regardless of its nature, we all have areas in our character and our story that need to be renovated and re-purposed, and sometimes our internal strongholds are harder to defeat than external ones. The proverbs writer said, “He who rules his spirit (is better than) he who captures a city” (Proverbs 16:32 NASB).

Let’s add our story to that of AIM’s and King David’s…let’s be men and women who rule our spirits, capture our strongholds, and use those places as beachheads for the glory of God.