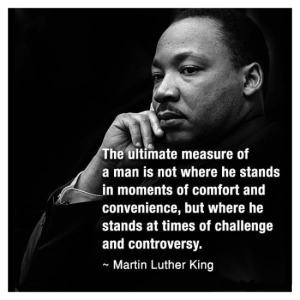 A good friend and esteemed math teacher (someone I wish I had known when I struggled my way through math in school), Dr. Rick Simon, recently shared a fantastic quote with me from Roman Stoic philosopher Lucius Annaeus Seneca, popularly known as Seneca.

The quote ties in perfectly with the “Unshakable” teaching series that we’ve been doing on Sunday mornings at Grace Church. Whether you have been a part of that series or not, I think Seneca’s words will inspire you with a Churchillian determination to never give up amid the tough times of your life.

“Prosperity shows a man but one part of human nature. Nobody knows what such a man is good for; neither in truth does he understand himself for want of experiment. Temporal happiness is for weak and vulgar minds; but the subduing of public terrors is a work that is reserved for more generous spirits. Calamity is the touchstone of a brave mind, that resolves to live and die free, and master of itself. The combatant brings no mettle into the field, that was never bettered; he that has lost blood, and yet keeps his stomach; he that has been under his enemy, and worsted, and yet comes on again, and gathers heart from his misfortunes—that is the man of hope and courage.”

Seneca was essentially saying that the true quality and worth of our character is most clearly revealed during times of trial and misfortune. His words are similar to Dr. Martin Luther King Jr.’s famous statement: “The ultimate measure of a man is not where he stands in moments of comfort and convenience, but where he stands at times of challenge and controversy.”

Let’s determine that those two sage quotations will be descriptive of us as we display God’s unshakable spirit throughout the many seasons of our lives.

4 thoughts on “Seneca on Unshakable People”