Chapter Eight: The Greatest Challenge of the New Millennium 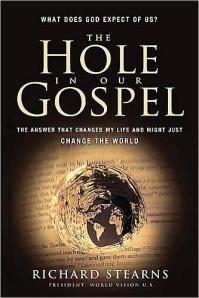 How rich do you feel?

Do you feel like you’re in the upper tier of the world’s wealthiest people? According to Richard Stearns’ quote from President Carter’s 2002 speech, “Citizens of the ten wealthiest countries are now seventy-five times richer than those who live in the ten poorest ones, and the separation is increasing every year.”[1] In a later chapter, Stearns will cite that 40% of the world’s people earn less than $2 dollars a day contrasted with 4.5% of the world’s people who earn at least $105 dollars a day (or $13.12 dollars an hour for an eight-hour work day).[2]

It’s pretty staggering to learn that a $13 dollar an hour job places the employee in the top 4.5% of income earners in the world.

Having said that, most of the people in the top 4.5% live paycheck by paycheck and worry about their money. How can it be that the people in the richest nations in the world live under such a constant low-grade fever of financial frustration and anxiety?

It seems that a quest is in order.

If we were to intentionally slash our current living expenses, we could re-allocate some resources toward the alleviation of poverty while simultaneously reducing the stress, anxiety, and anger that often surrounds our monthly budgeting processes.