I think the Lord spoke to me earlier this week. It started with a whisper in my soul, and then grew in to a confidence that God was encouraging me to dream bigger dreams, and believe Him for some significant answers to prayers. Later in the day a friend contacted me and said, “I’ve been praying for you that all of your wildest dreams would come true.”

I felt incredibly strengthened and encouraged.

My excitement didn’t last; however, because shortly thereafter a second voice chimed in, rehearsing my past failures and current limitations. Before I knew it I had built a case for why my wildest dreams were just that—wild, unrealistic daydreams.

There always seems to be a second voice that undermines God’s word of encouragement, hope, and promise.

I think we should muzzle the second voice.

Jesus said, “You will know the truth, and the truth will set you free,” but what if we’ve embraced as truth the lies from the second voice? If the nature of truth is to liberate, then the nature of lies is to ensnare.

If you can identify any areas where the second voice has trumped the first voice, it’s time for you to lace up your boxing gloves and go to work.

Job 5:3 says, “I saw the foolish taking root, suddenly I cursed (punctured, perforated, punched a hole through) its habitation.” 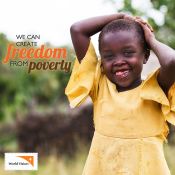